This has been a pretty wild week, more wild than usual I think we can all agree. The topic I found the most interesting wasn’t about one of the countless 0day flaws, it was a story from Slate titled: In Praise of the Private Email Server

The TL;DR says running your own email server is a great idea. Almost everyone came out proclaiming it a terrible idea. I agree it’s a terrible idea, but this also got me thinking. How do you explain this to someone who doesn’t really understand what’s going on?

There are three primary groups of people.

If I had to guess, most of #3 knows running your own email server is pretty dangerous. #1 probably is happy to let someone else do it. #2 is a dangerous group, probably the largest, and the group who most needs to understand what’s going on.

These ideas apply to a lot of areas, feel free to substitute the term “security” “cloud” “doughnuts” or “farming” for email. You’ll figure it out with a little work.

A long time ago, if you wanted email you basically had to belong to an organization that ran an email server. Something like a university or maybe a huge company. Getting a machine on the Internet was a pretty big deal. Hosting email was even bigger. I could say “by definition this meant if you were running a machine on the Internet you were an expert”, but I suspect that wasn’t true, we just like to remember the past as being more awesome than it was.

Today anyone can spin up a machine in a few seconds. It’s pretty cool but it also means literally anyone can run an email server. If you run a server for you and a few other people, it’s unlikely anything terrible will happen. You’ll probably get pwnt someday, you might notice, but the world won’t end. How do we convince this group that just because you can, doesn’t mean you should? The short answer is you can’t. I actually wrote about this a little bit last year.

So if we can’t convince them what do we do? We get them to learn. If you’ve ever heard of the Dunning Kruger effect (I talk about it constantly), you understand the problem is generally a lack of knowledge. 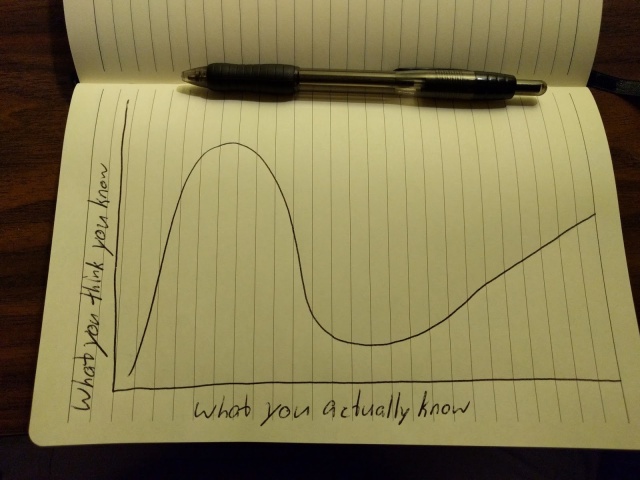 You can’t convince experts of anything, especially experts that aren’t really experts. What we can do though is encourage them to learn. If we have someone we know is on the peak of that curve, if they learn just a little bit more, they’re going to fall back to earth.

So I can say running your email server is a terrible idea. I can say it all day and most people don’t care what I think. So here’s my challenge. If you run your own email server, start reading email related RFCs, learn about things like spam, blacklisting, greylisting, SPF. Read about SMTPS, learn how certificates work. Learn how to mange keys, learn about securing your clients with multi factor auth. Read about how to keep the mail secure while on disk. There are literally more topics than one could read in a lifetime. If you’re an expert, and you don’t know what one of those things are, go learn it. Learn them all. Then you’ll understand there are no experts.

Let me know how wrong I am: @joshbressers